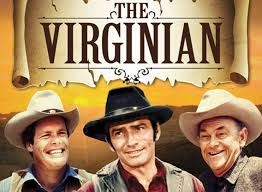 The TV Western “The Virginian” was set in and around Medicine Bow, Wyoming in the 1890s. The Virginian – whose real name was never revealed – was the foreman of The Shiloh Ranch, owned by Judge Garth . In addition to running the ranch, The Virginian had to ride herd on the Judge’s tomboy daughter Betsy and a crew of cowboys which included his friend Trampas, the top hand, and a loyal ranch hand named Steve Hill. Read the stories which tell of the adventures of The Virginian, Trampas and the rest of the residents of the Shiloh Ranch in the turbulent times of the Old West.

The following authors write in this fandom.   Click on their name below to read their stories.

© womenwritersblock.net, 2018-2022. Unauthorized use and/or duplication of material without express and written permission from this site’s authors and/or owner is strictly prohibited. Excerpts and links may be used, provided that full and clear credit is given to author’s name and womenwritersblock.net with appropriate and specific direction to the original content.