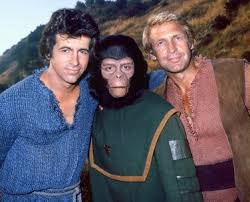 Based on the movie of the same name, this limited series (14 episodes) begins with the crash of an Earth spaceship that encountered a time warp while approaching Alpha Centauri on August 19, 1980. The spaceship is manned by three astronauts, one of whom has died in the crash. The other two astronauts, Colonel Alan Virdon and Major Peter J. Burke, are unconscious but are rescued by a human who carries them to an old bomb shelter. After the human opens a book containing historical text and pictures of Earth circa 2500, the two astronauts are convinced that they are indeed on a future Earth.

The three fugitives wander around the territory that used to be the western United States having various encounters with apes, humans, and old human civilization ruins.

The following authors write in this fandom.  Click on their name(s) to find their stories.

© womenwritersblock.net, 2018-2022. Unauthorized use and/or duplication of material without express and written permission from this site’s authors and/or owner is strictly prohibited. Excerpts and links may be used, provided that full and clear credit is given to author’s name and womenwritersblock.net with appropriate and specific direction to the original content.